I get dropped off by the war memorial with its fading wreaths of paper poppies, colour drained by the passing year. 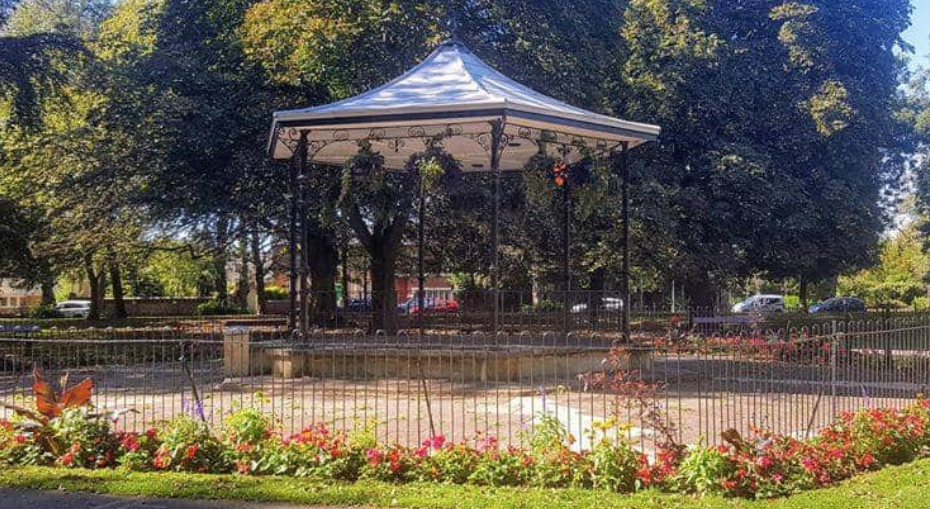 The names of the Wisbech war dead are etched into the granite cross – the Reeves, Shaws, and Whiteheads, the names of the lost. ‘Love thou for England, it says, ‘for evermore,’ the past tugging on the sleeve of the present.

The relentless wind makes it hard to believe it is summer. I wander past the windows of an old shop selling overalls, caps, and workmen’s gloves from another century. This town, I think. It’s like a stage set waiting for a story with its brick alleys and ancient steps. I can hear the voices of the town drifting through Ghost Passage, unpicked conversations, curses, and laughs. I want to understand Wisbech and the people who have lived here, live here still. I want to understand how they got through the last two years. I want to hear of them, the things they thought, the things they did and the things they do.

To me, there is an unsettled atmosphere. Wisbech is a town struggling to unite itself. Is that unfair? I am a stranger tasting the air after all. Daily life sits in the shadow of the architecture, in the corners, the cafes, the shops, in the houses, on the estates, behind the high walls, behind locked doors, in the buildings that have fallen from grace. Wisbech voices are everywhere. Can I claim to be witness and interrogator of the experience of the pandemic, of lockdown, of living in this place?

Wisbech. Seven letters. Anglo-Saxon origins. The name means on the back of the River Ouse, anchored then by its geography.

On the corner of the street is WMS Recruitment Agency advertising workers for factories and agriculture. It feels as if it has just drawn breath and closed its doors. Abandoned.

I turn right into the marketplace to escape the wind shunting across the heavy water of the River Nene. Here, there is a slow bustle. I pass the Polish grocer’s and try to count the discount shops adjacent to each other – so many I give up and head across the square past the marquee offering free Covid tests with its two bored volunteers staring into their phones.

A man with a muzzled dog walks by. ‘Lovely dog,’ I call out and he laughs. ‘He’s a working dog,’ he calls back at me and I realise there’s nothing lovely about this dog after all; he’s been trained to take your hand off.

A slew of voices in the open air. Lithuanian, Polish, Russian, Latvian, Romanian, Bulgarian. Everyone in groups bubbled by language. Men on mobiles, unrestrained, loud. In Costa Coffee I watch the young, effortlessly slipping between Polish and English as if they are switching on and off a light.

I tweak back time’s curtain and see what was there; an old man sitting in Loafer’s Café from the first peek of morning until the early afternoon. People measuring loneliness by the length of a conversation they could have or on the other side of speech – measuring the silence. What stole the voices of the children and young people? Shut us all down and robbed us of a kind of innocence. No longer the comfort of touch, of being near, of being together. It had, observed a shop owner, taken its toll on the people who ‘wear their silence’ as if they have forgotten what it is to be going out, to say hello to another on the street.

That’s when the See you Soon project came to town. The packs of cards distributed to shops and cafes, wherever people pass. Available to send to friends and family, to connect, to do, to celebrate, to have and to hold. People jumped on the idea. The cards were like a colourful stone thrown into a still pond, rippling outwards. And one of the places, the cards went was the Oasis Centre on the Waterlees Estate.

Pretty much nothing silences Chris who manages the place. Waterlees is where more than a third of its children are living in poverty. Lots of rented properties and plenty of HMOs or Houses of Multiple Occupation. The estate has got a bit of a name for itself, but she wouldn’t be anywhere else.

I cross the border from stage set Wisbech with its elegant facades on one side of the river to a different reality on this. The low, modern building with concrete flower beds and a sweep of vigorous summer annuals opens into a carpeted hallway. There are community leaflets and books to share. It’s a quiet time of day, near empty. I follow Chris into a wide-open room, plenty of air and light where people come to do courses.

‘I love this area,’ says Chris. ‘It’s the most deprived in Cambridgeshire but the community spirit is brilliant.’

The centre was closed but locked doors couldn’t keep Chris away. ‘I was here, on the phone every day to chat,’ she said, ‘to see if they needed help with their shopping. It’s been a frightening time for all of them.’

I close my eyes and imagine the Oasis closed. A cold, empty building hemmed in on all sides with need.

‘You see, the pandemic highlighted the lack of services. Health and well-being was horrendous and this escalated. There were many people struggling and not claiming the benefits they are entitled to…the support groups are not there. These people are isolated.’

‘A lot of the government,’ adds Chris, ‘haven’t even got mental health on their radar but it’s the biggest issue everybody is facing. We must have lots of empathy.’

She explains, and don’t I know it, the accumulation of difficult things. How it strips away self-esteem.

‘Wisbech,’ she goes on. ‘You have people of the two extremes, it’s very divided. The people here need to give it a whirl. There’s a weird thing about the river, the south and the north, one side is more affluent. They don’t come here in case they catch something.’ And yet… ‘This community is unbelievable. There was a house fire and the whole place responded. Those people were given everything they needed…You wouldn’t catch me wanting to work anywhere else.’

When we leave, I can sense the strong communal beating heart of the place, ‘people are starting to believe in themselves more, that’s slowly starting to happen.’ And if it is, it is mainly down to people like Chris.

Before I take the road back to the town centre, I visit two barges big as day, marooned on a sea of sand in a cluster of trees. The Spinney is a marvel, a put together place managed by Violet and it is a primary-coloured Neverland for children, created for them and by them. Tramp around the Heath Robinson tower or peer into an underground lair, journey through the sand dunes with murals on the walls, sit, dream, reflect, hide, or shadow box the sky, it’s a world of story, a truly good place to be even if the teenagers did burn down the pavilion.

The sun comes out with Rachel. Young, striking, full of warmth, a rich glow about her and a graceful determination. She works with children and is soon to fly back to the Spinney as if carried on a Mary Poppins wind.

We sit in Costa Coffee while she remembers the first lockdown and how it affected children in her care. How they have had a hard time understanding what has been happening. ‘Some of them feel as if they have been punished while others have adapted really well’ she says and sips her hot chocolate. She was still with The Spinney then just before leaving to take up with a nursery in the centre, and Violet and the other women tried to find a way around problems of online access for parents and kids stuck at home. They helped with Rainbow Boxes full of things to do provided by a local consortium of organisations. Imagine finding a rainbow at your door on a day of going nowhere.

At that time, she recalls, families grew more withdrawn, parents were on their phones more, less engagement with anyone. Rachel, herself had a lot of training online, ‘not taking anything in but ticking boxes. And your work is coming into your house. It’s invasive, me and my boyfriend feel that it (the lockdown), came into our home and blurred the lines. It’s had an effect on everyone and now it’s trying to reverse the effect. We have to try to get people back to enjoying things, to use it but not to find it invasive.’

Accumulation – and Rachel snaps out the numbers: ‘There have been more referrals to social care, domestic violence up by 65% and according to Ofcom 84% of 3-4 year olds are using video-sharing platforms on phones. There is less outdoor activity and an increase in child depression. I know a child on suicide watch. He’s only thirteen,’ she adds.

There is a lack of communion. ‘The young babies, their interactions are slower. It impacts on their development…the babies are isolated and have not seen another baby before. We have masks on our faces so they cannot see us talking properly. We have literally been seen as a pair of eyes and that is so sad.’ And I think, how much this young woman is observing things we don’t even think about, absorbing deeply the entire experience of what is lost and what can be gained.

Rachel knows it’s not an equal experience. She teaches piano in a private school and the mental health of the children there seems so much less affected. ‘They will moan about it, but they are not up against it and kids at the school are quite happy.’

I leave Rachel and turn onto Hill Street, pass the Britannia Café with its pavement menu offering gammon and chips, past the beauty salons, hairdressers and nail bars clustered together as if this was a medieval street with its glovemakers and tanneries. I pass a thin woman fidgeting with worry. She has been there for a while now. Who knows what she is waiting for.

How long the road is back to the Georgian houses. Across the river to the playing fields of the grammar school, the thick walls of a house burning with vine lilies, the shop of chandeliers, the cultivated ivy clambering over Peckover House, the gates locked, the windows shuttered, and the Town Council entrenched in rooms lined with panelled wood, decked with portraits of power, and the regalia of rule in reach for important occasions. You can see from their windows the statue of Thomas Clarkson, champion campaigner against the slave trade and a little further down on the other side of the silted river, the birthplace house of Octavia Hill.

I am drawn to her home on the darker, poorer side of the river where the Victorian buildings have an air of loss. Octavia Hill was a celebrated social reformer; her heart lay with the Victorian poor and she rescued families from their slums. Her own house now, is closed up and through the neglected windows are odd items for sale like old teeth. I can’t help wondering what she would think of her birth town today. What she would do.

I walk back to the war memorial where my journey began and will now end. Two girls in crop tops and leggings practice a dance routine in the small public space behind it. Opportunistic pigeons circle the benches. One of the girls holds her phone high to capture their moves. The pigeons rise up in a cloud of wings. The sun lifts for a moment and bathes the centre of Wisbech in light.

There they are, the young creating something new.

Visit BRANDON
BACK TO SEE YOU SOON PAGE
Back to Blog