Exploring with Escape from Fort Lagoon

MarketPlace Young Producer, Jodie Hicks joined the group from the Escape from Fort Lagoon production as they did some Research & Development exploring Fenland and Forest Heath, as they look to perform in the area in 2022. 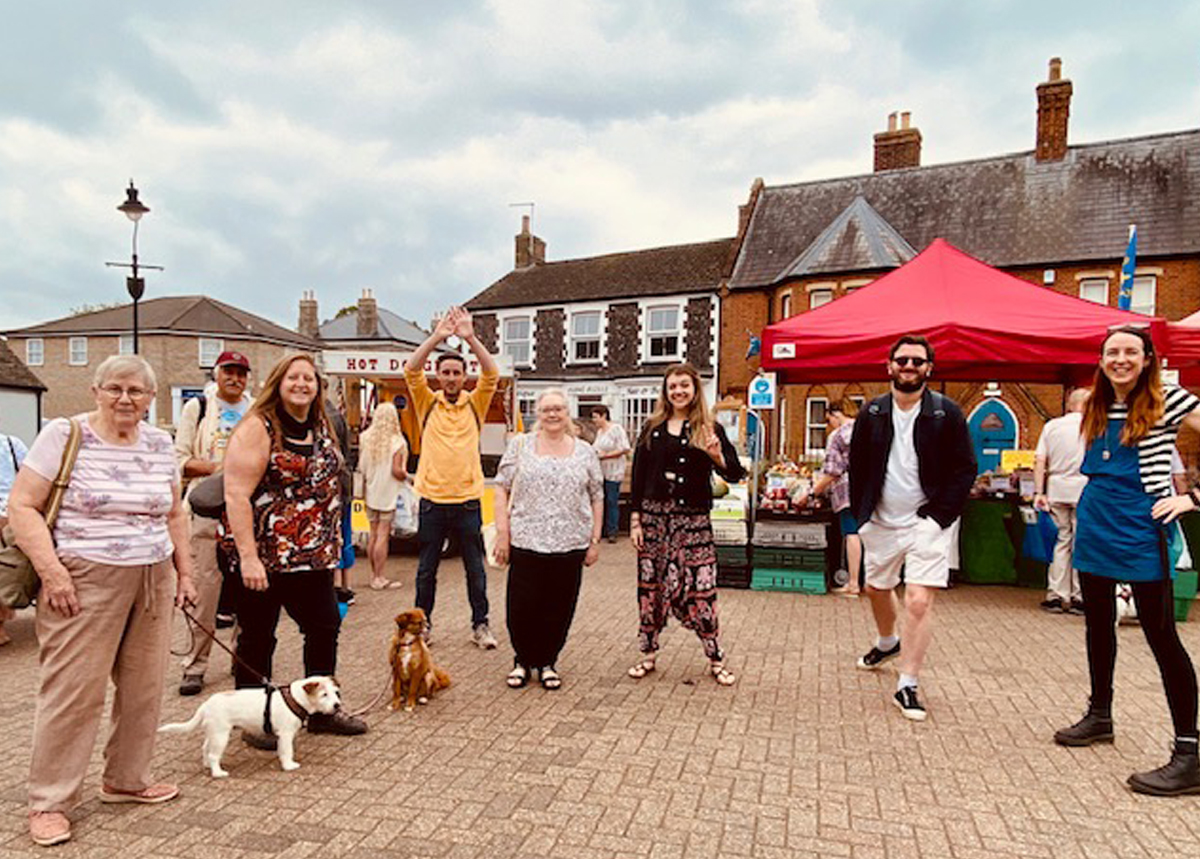 Members of Brandon Creative Forum, the MarketPlace team and Submersion Productions stand together for a photo in Brandon town centre.

Read about the Escape From Fort Lagoon R&D project here.

On Thursday 10th and Friday 11th June 2021, I had the pleasure of accompanying the team behind the immersive theatre game Escape from Fort Lagoon, by Adam McGuigan (Wake the Beast) and Jude Jagger (Submersion Productions), around several towns in West Suffolk and Fenland. They were scouting out possible locations where they could produce their water-based immersive theatre game experience as part of their Research & Development. Alongside this, they were testing out an app which audience members would use during the performance, experimenting with original songs with a choir and meeting lots of local people who would be able to advise and assist them on this journey.

We started in Brandon and were guided around the town and their local riverside walk by members of Brandon Creative Forum who had some valuable insights into the town and the people who populate it. As the company would need access to a body of water to perform in, they could specify which places of the river were safe to swim in and where performers and audiences could enter the river. We discovered a series of jetty’s which could be ideal for little pockets of performance spaces.

Next, it was onto Mildenhall where the team met Imogen Radford, a regular ‘wild swimmer’ in the River Lark. She went into great depth about the different safety considerations for swimming in rivers. Safety tips such as wearing waterproof protective footwear and getting into the water slowly to ease your body in gently to the sudden change in temperature and prevent performers and audience members losing their breath.

Finally, we arrived in March and I helped Godfrey Smith show the team around the area surrounding the River Nene before meeting up with the March Can’t Sing Choir. I have lived and grown up in March my whole life and it was interesting to see it through the theatre company’s eyes. I think I forget to appreciate how green it is and how many open spaces we have on our doorstep. Coming from Manchester and London, they were amazed at just how far you can see and how many wide-open spaces we have.

When we met up with the choir, we split into two groups; one group was trialling the app which Jack Hardiker had designed to test if the choir members could learn some short phrases to sing from their mobile devices, and one group to be taught these singing parts by the choir master Sally Rose. Speaking with Jude and Jack who led the app group, I think they found this exercise especially enlightening as they realised that learning these short songs from an app was no replacement for a choir master who could correct things as she went along, and practise blending these different parts together to make a really beautiful sound.

On the second day, we met with David Johnson at the Empress Pool in Chatteris where the team experimented with the acoustics of indoor pools and used the time to reflect on what they had learned and brainstorm new ideas for how the show would need to adapt to what they now know. After this, David gave us a walking tour of Chatteris town centre. He provided  the team with information on his experiences of how to organise events and arts projects in Chatteris.

From there we drove to Gildenburgh Water in Whittlesey where the team swam in the lake and learnt about the different safety measures that the owners would insist upon should performers and audience members need to go into the water. We walked around the area and found some quite interesting little patches of field which could be suitable for performance spaces.

At all of the places that we visited, the team were taking pictures of everything and making notes on what would work and what wouldn’t work at each location. They were taking into consideration factors like how accessible it would be for members of the public, how far people would have to walk, how loud the noise in the surrounding area would be, how enclosed it is and what (if any) access they would have to the water. I believe that actually trying out wild swimming for themselves and learning how they would need to adapt the show to take into consideration what they now know has been a crucial step towards putting on a show here.

Also, testing the capabilities of the app they are developing with members of the public and learning what tweaks would need to be made, would not have been achievable without this Research and Development stage, supported by the Arts Council of England with National Lottery funding.

The project has the potential to be unlike anything Fenland and Suffolk have seen before, so now more than ever I have learnt how important this stage in the creative process is, and how it will now go on to inform so many decisions – both creatively and logistically in the future when Submersion Productions take the plunge and perform it.

Read about the Escape From Fort Lagoon R&D project here.

To stay up to date with all our project news sign up for our newsletter.